After winning only one of four games and getting outscored 44-21 in the Dighton Summer Baseball Tournament, the 11 Year Old All Stars from West Warwick bounced back and almost captured the State Championship, losing to Washington Park in the finals.

Despite taking an early lead, West Warwick lost 7-5 in the Opening Game.

West Warwick jumped out to 3-0 lead in the bottom of the first inning when Liam Gravier (single), Adam Marsh (hit by a pitch), Ty Condon (walk) scored on a bases-clearing double by Justin Perez.

In the bottom of the second inning, they built a 5-0 lead when Sean White (walk) and Quinn Kortick (reached on an error) scored on a bases loaded walk to Adam Marsh and a fielder’s choice.

Unfortunately for West Warwick, however, Washington Park’s pitchers shut them out the rest of the game while their offense took advantage of walks and errors to take the lead. In the top of the fourth inning, Washington Park took a 6-5 lead when they scored five runs on two walks, three errors and two hits.

Led by the solid pitching of Ty Condon and an 11-hit attack, West Warwick cruised to an 11-3 victory over Apponaug.

Condon, who worked five innings, struck out seven batters and did not allow a free pass.

In a classic championship final, Washington Park broke open a 1-1 tie in the top of the sixth inning to defeat West Warwick, 3-2, and earn bragging rights as Rhode Island’s representative in the 11 Year Old New England Regional which will be hosted by West Warwick next weekend.

After starting pitcher, Justin Perez, held Washington Park scoreless with four strikeouts in the first two innings of the game, West Warwick took a 1-0 lead in the bottom of the second inning when Perez was hit by a pitch, moved to second on a sacrifice bunt by Quinn Kortick, and scored on a double by Alex Titelis.

The lead, however, was short-lived as Washington Park came back to tie the game at 1-1 in the top of the first inning on two walks and a double.

The game stayed knotted at 1-1 until Washington Park scored two runs on two walks, three hits and a fielder’s choice.

West Warwick cut the lead to 3-2 when Ty Condon (reached on an error) scored on a two-out single from Alex Titelis, but the rally would be cut short when Hector Diaz, who struck out eight batters, induced a groundout to end the game.

Justin Perez and Adam Marsh combined to strike out ten batters and allow only four hits. 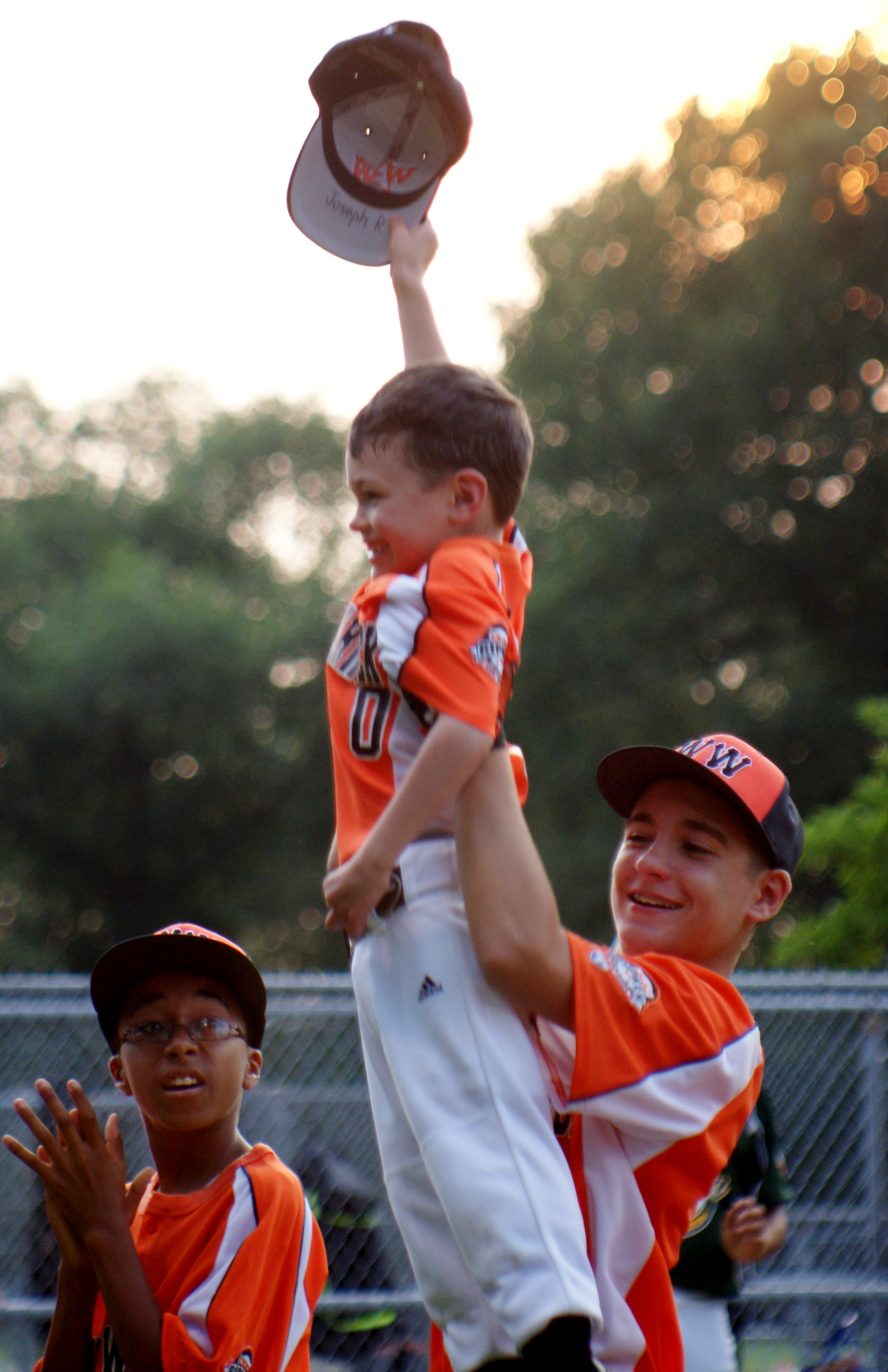 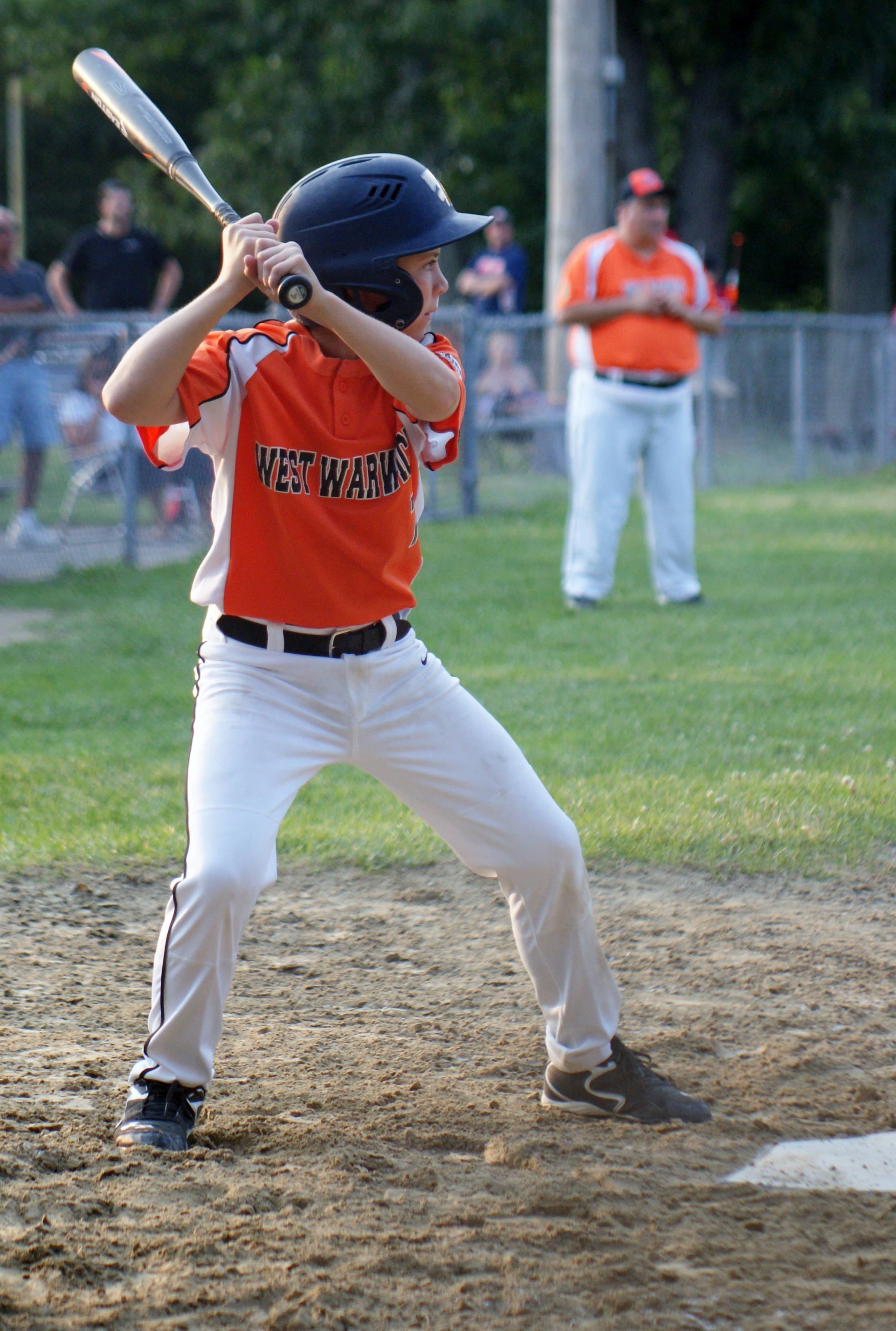 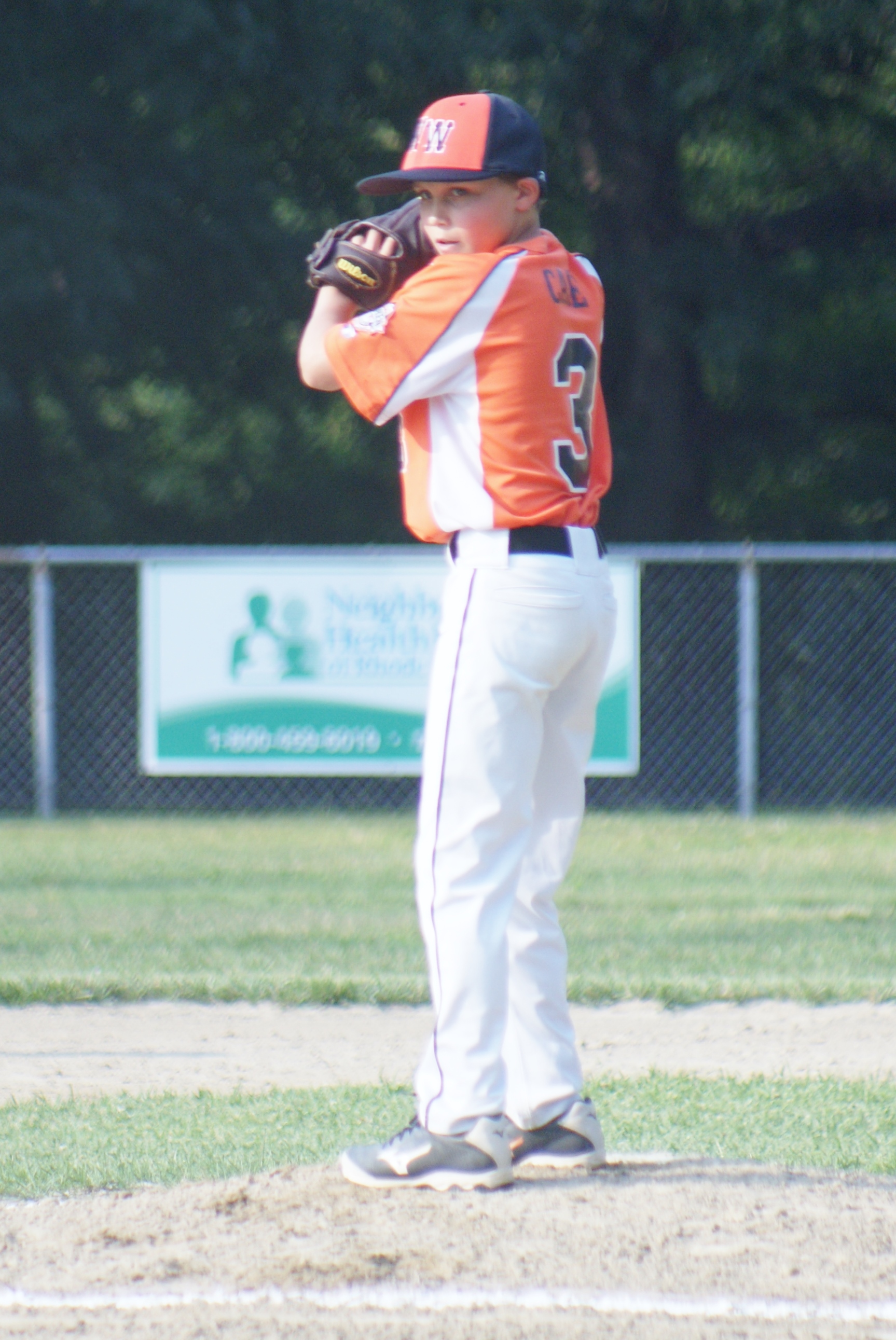 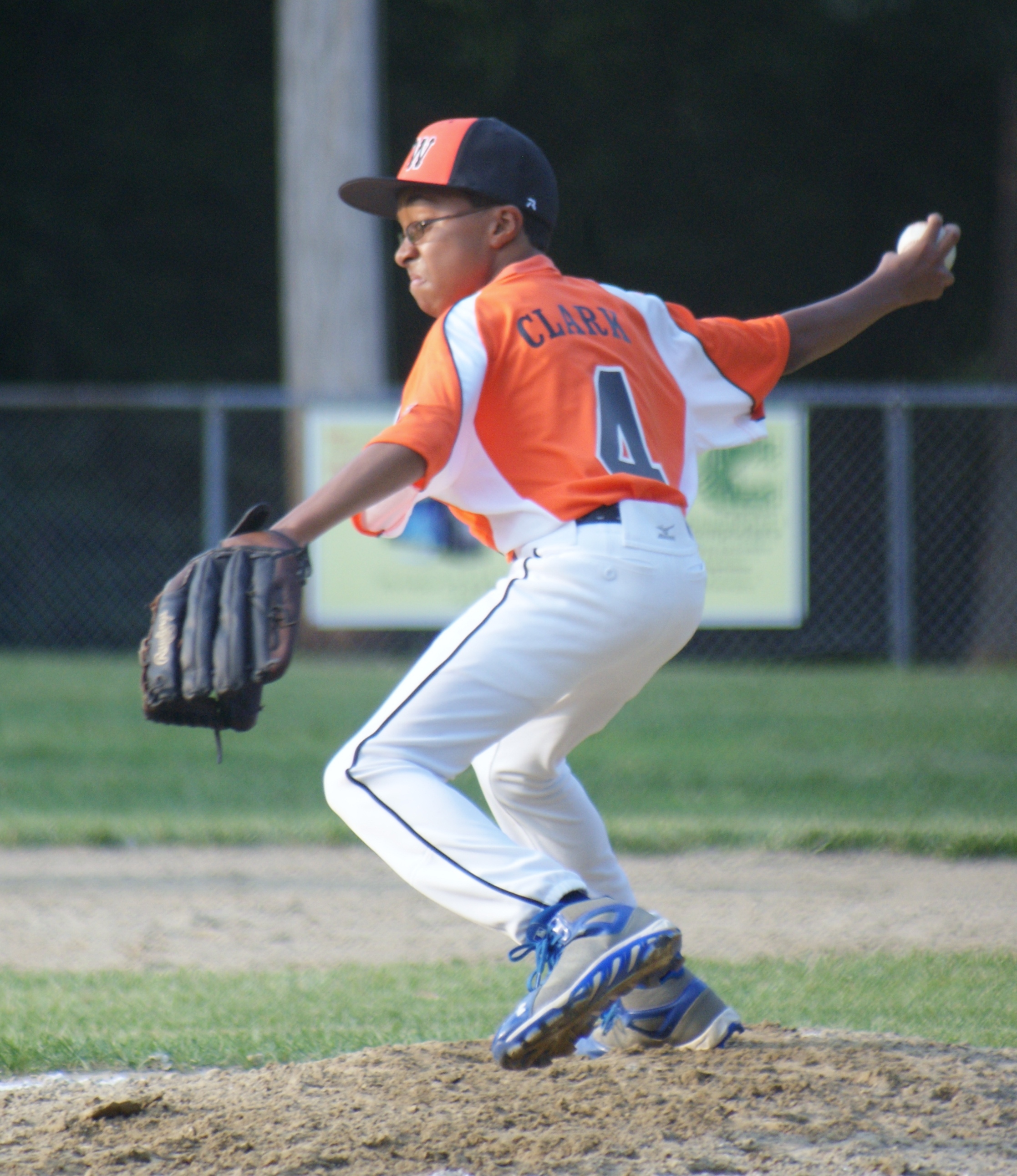 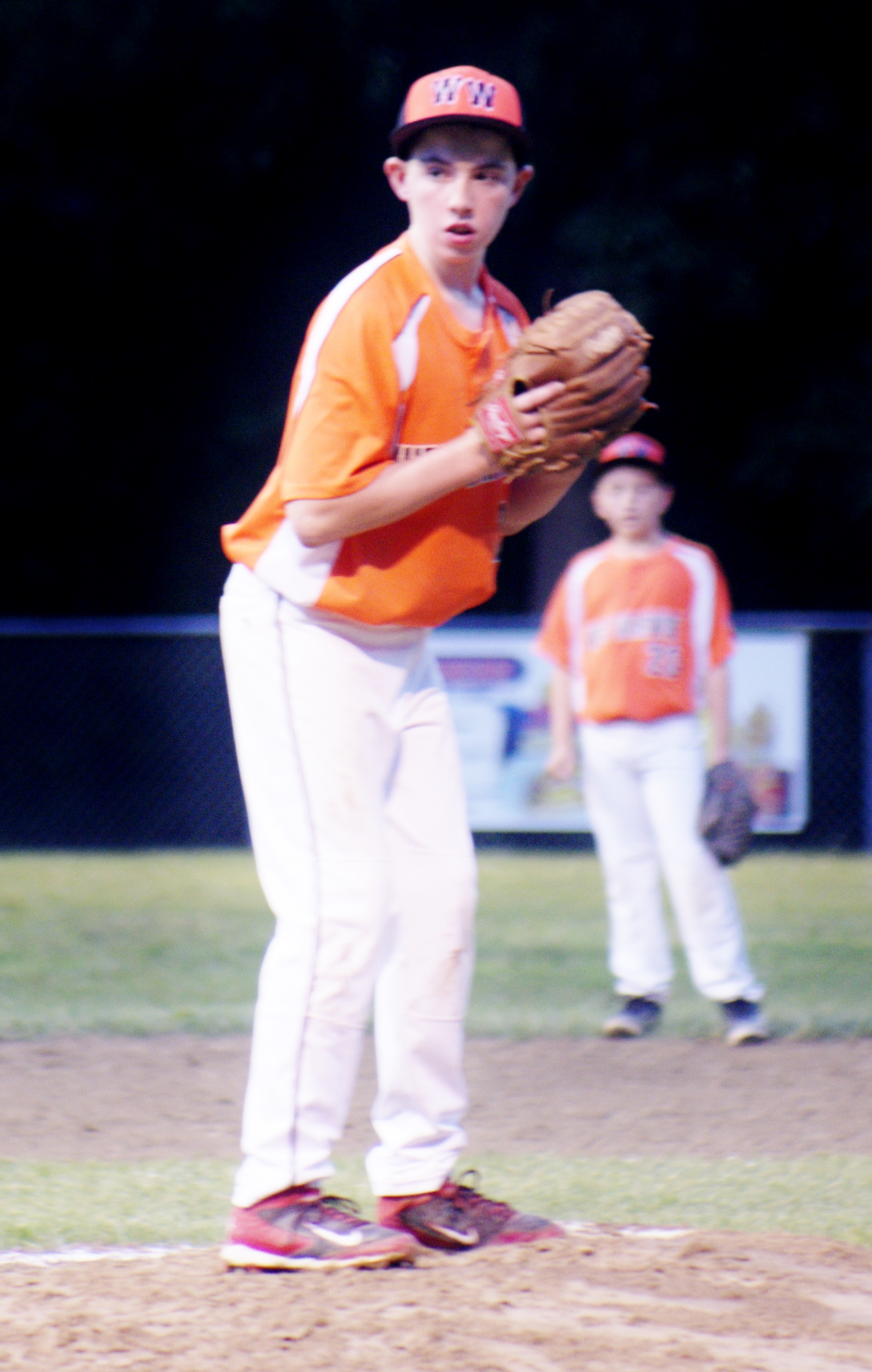 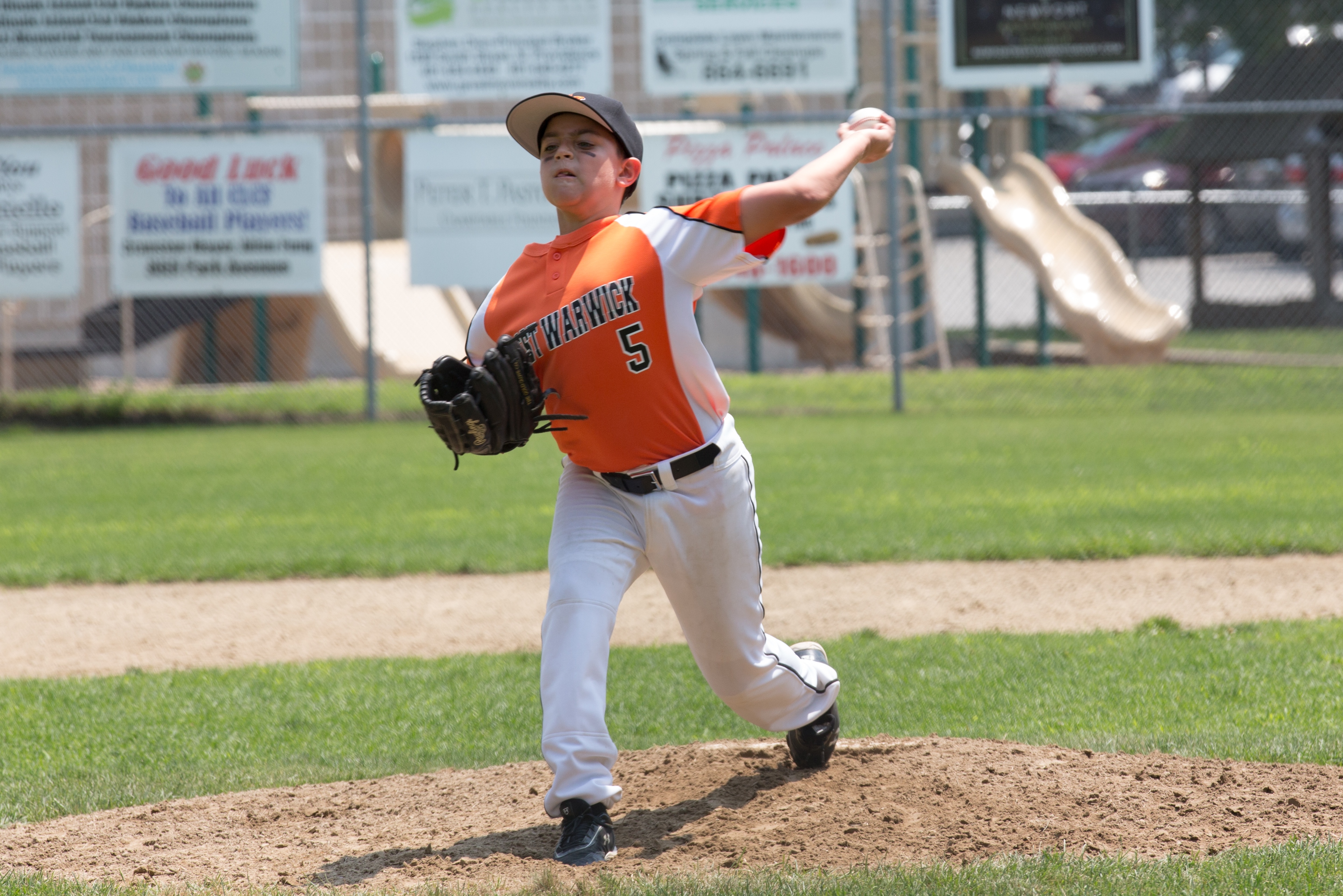 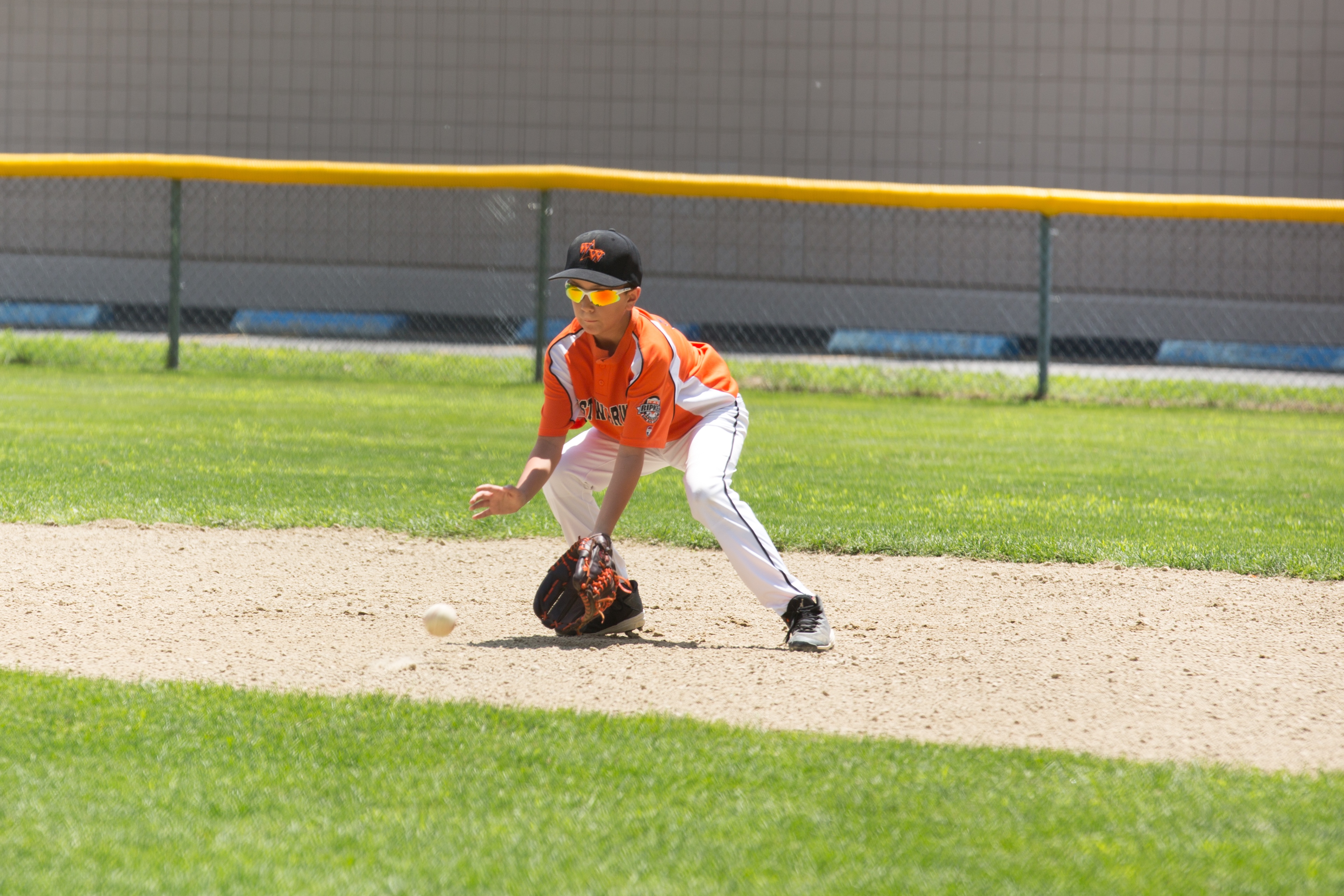 Posted by Richard Grenier at Jul 10, 2015 5:00PM PDT ( 0 Comments )
more editing options
12 Year Old All Stars:
Opening Round:
The West Warwick 12 year old All Stars came from behind to defeat CLCF in the opening round of the Rhode Island Cal Ripken State Tournament.
After falling behind 4-0 in an opportunistic way, West Warwick fought back for the victory. In the bottom of the first inning, West Warwick scored two runs on one error, one walk, two wild pitches and a key rbi single by Kyle DaSilva.
After starter Ethan Case and middle reliever Guy Clark silenced the bats of CLCF, West Warwick scored six runs in the bottom of the third inning for an 8-4 lead.
Highlighting the inning was Sam Corrado, who blasted a 230 foot Grand Slam to give the WW All Stars the lead.
Getting hits for WW in the inning were Cameron Hughes, Alex Johnson (rbi single) and Chase Joubert (rbi triple).
West Warwick received fine pitching from the trio of Ethan Case, Guy Clark and Sam Corrado. Case, who worked the first two innings, threw 33 of 53 pitches for strikes. Clark, who earned the victory in middle relief, allowed just one run on three hits while striking out two batters. Corrado, who struck out four of the six batters he faced, earned the save.
Second Round:
Despite giving up only four earned runs, the WW 12 year old All Stars lost 13-3 to the defending State and New England Champions, Washington Park of Providence.
With two out in the first inning, Washington Park, who has competitively played together since September of 2014, scored three runs on one home run, two singles, one passed ball and one wild pitch. In the top of the fourth inning, disaster struck for the upset-minded WW All Stars when they allowed seven runs (only two earned) on six hits (three infield hits) and five errors.
West Warwick, however, fought back with a home run from first year All Star, Joe Dionne, in the bottom of the fourth inning.
After Will Cornicelli retired three straight batters in the top of the fifth inning, WW scored two more runs in the bottom half of the inning when Sam Corrado (walk) and Chase Joubert (double) scored on a fielder's choice (Tyler Grandchamp) and an error on a hard grounder by Kyle DaSilva.
Loser's Bracket Semi-Finals:
In a rematch of their opening game, West Warwick bounced back with a 10-4 victory over a scrappy CLCF squad. CLCF, who won as 9 and 10 year olds before Washington Park's run to the State and New England Regional title as 11 year olds, faced 10-0 deficit in the bottom of the fourth inning, but managed to extend the game and play all six innings.
In the top of the first inning, WW left know doubt that they wanted to bounce back from their 13-3 loss to Washington Park by scoring two runs (Ethan Case and Sam Corrado) on a double by Corrado and a wild pitch. In the top of the third inning, West Wawick broke the game open by sending 14 batters to the plate and scoring seven runs on three hits and five walks and two hit batsmen.
Kyle DaSilva led the way with two doubles and three rbi's. In addition, Justin Firth had a clutch two-run single. Sam
Corrado, who picked up the save in their first game against CLCF, earned the victory by allowing only four hits and striking out nine batters.
In addition to Corrado's and DaSilva's extra base hits, West Warwick received offensive support from Ethan Case (two stolen bases and two runs scored), Chase Joubert (one run scored and one rbi), Joe Dionne (one single and four stolen bases), Kyle Rossignol (one stolen base and one run scored), Cam Hughes (one run scored), Andrew Sears (two stolen bases and one rbi), Justin Firth (two singles and two rbi's), and Will Cornicelli (one run scored).
Loser's Bracket Final:
Despite the stellar performance of starting pitcher Chase Joubert and the solid relief job of Andrew Sears, the West Warwick 12 year old All Stars lost, 3-2, in eight innings to the Apponaug All Stars in the Rhode Island Cal Ripken State Tournament.
Joubert was nearly unhittable, allowing just one hit, a seeing-eye double in the top of the fourth inning down the right field line. In six innings pitched, the righty struck out ten batters and allowed two unearned runs. In fact, as the game went on, his command of the strike zone got stronger, as he threw 30of 40 pitches for strikes in the last three innings.
Sears, who pitched two innings of solid relief, struck out six batters and allowed just one unearned run on one single. Out of 38 pitches, he threw 26 strikes.
After Joubert left two runners stranded in the top of the first inning, WW scored two runs on hits from Sam Corrado (single), Chase Joubert (rbi triple) and Kyle DaSilva (rbi single).
Unfortunately for West Warwick, who only struck out five times in the game, those would be the only runs they would score in the eight-inning contest, leaving ten runners stranded.
Apponaug, however, took advantage of four West Warwick fielding errors to score three unearned runs on two hits.
The 12's will continue their summer all star trek later this month (July 29th-August 2nd) in the Dighton Invitational Summer Tournament.
West Warwick Cal Ripken - 12 Year Old All Stars
Manager:  Richard Grenier Sr.
Coach:  Richard Grenier Jr.
Coach:  Matthew Grenier
Ethan Case
Guy Clarke
Sam Corrado
Will Cornicelli
Kyle DaSilva
Joe Dionne
Justin Firth
Tyler Grandchamp
Cameron Hughes
Alex Johnson
Chase Joubert
Kyle Rossignol
Andrew Sears
Batboy:  Joseph Reynolds 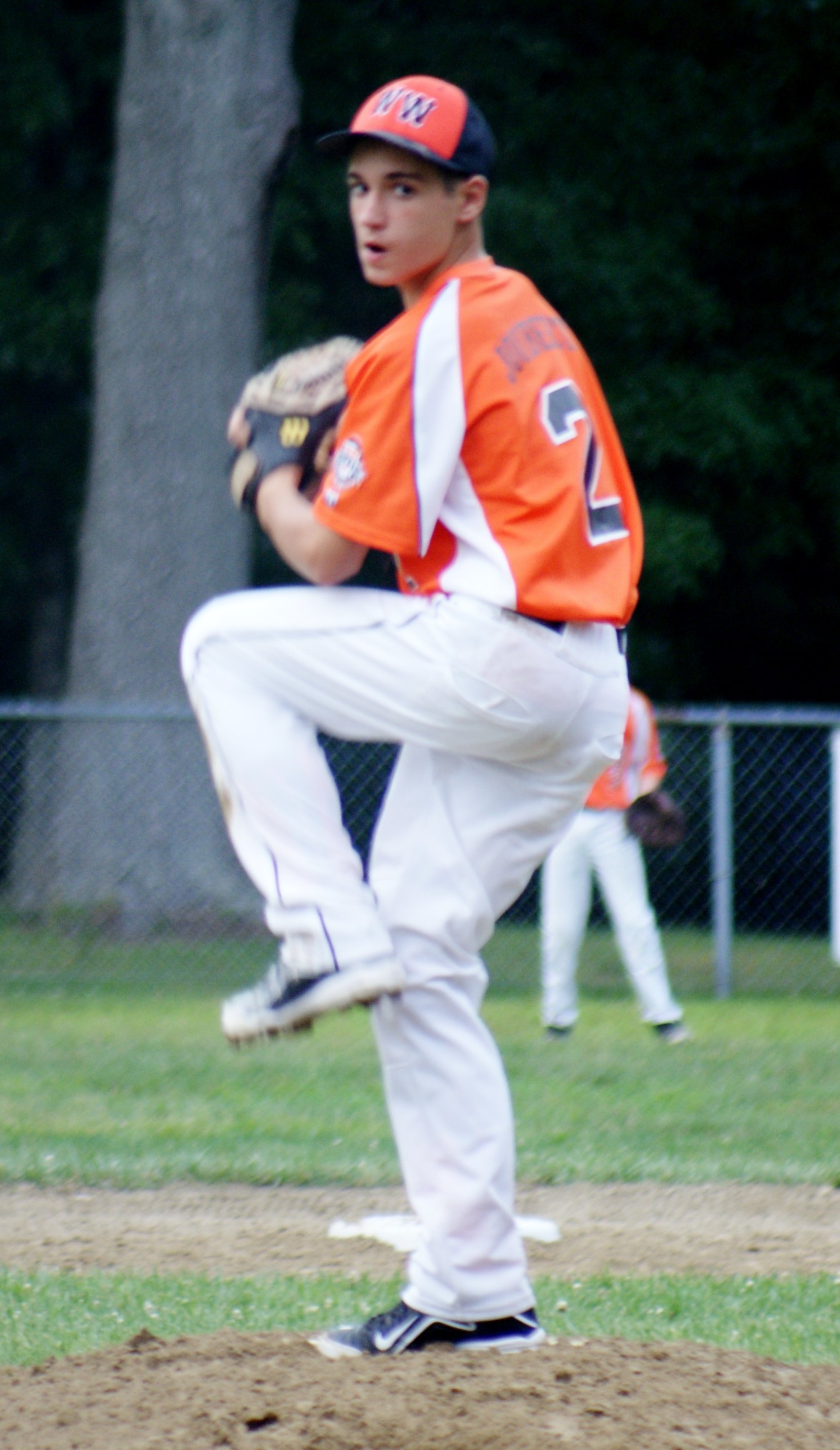 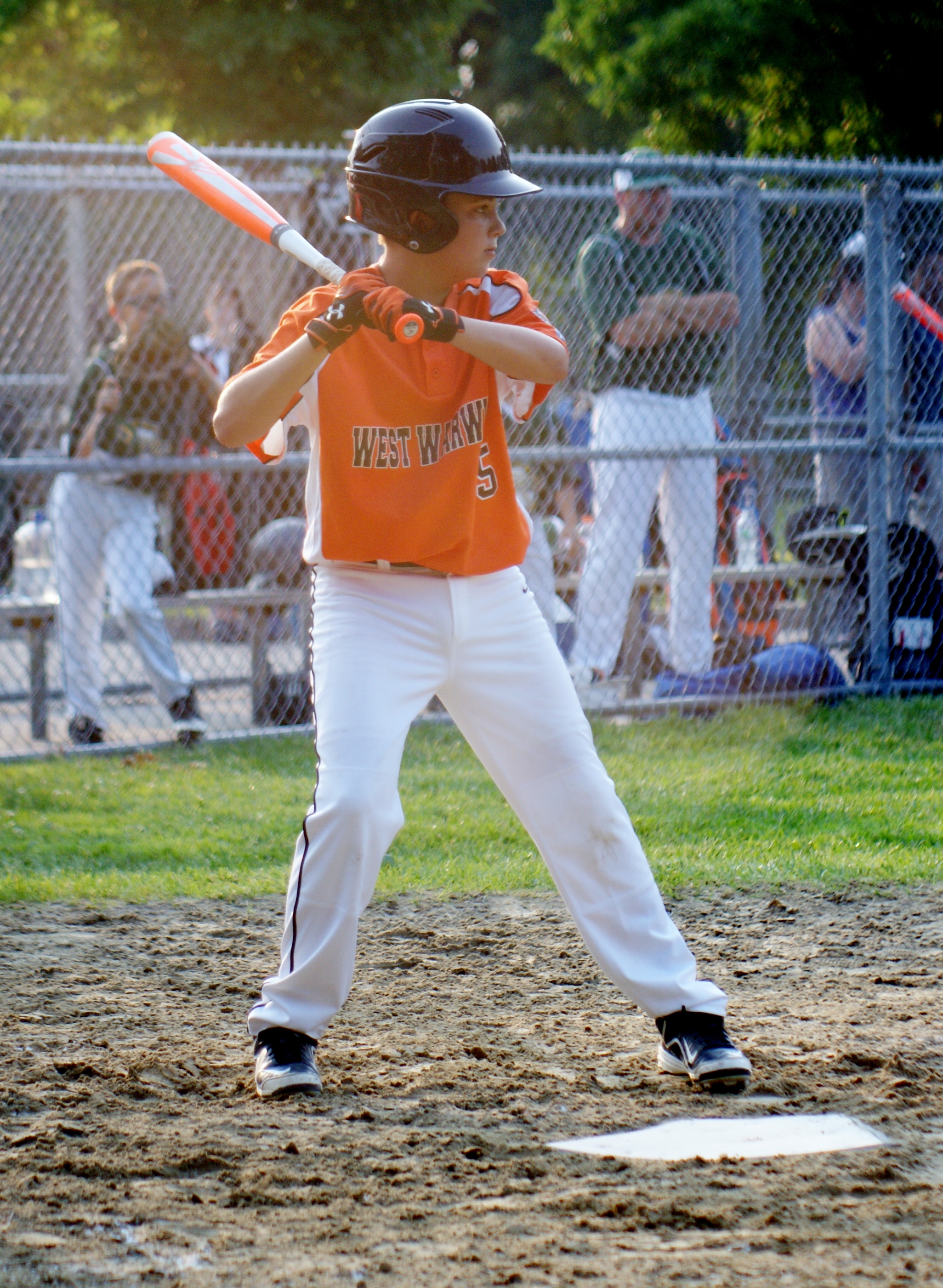